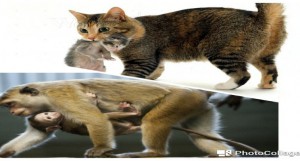 The Managers, Leaders and Events depicted in
this blog is fictional. Any resemblance or
similarity to actual events, entities or leaders,
whether living or dead, is entirely coincidental

No Managers were harmed while writing this
blog

One of my bosses explained to me his thoughts around the Monkey Management Style v/s Cat Management style- new to me then. The major difference in these styles can be observed if you know the difference between how a cat carries kittens v/s how a monkey carries its babies. For those stuck in concrete jungles for a good part of life, check picture.

The objective in both cases is transportation from Point A to Point B for food, water or shelter. However, the difference is in the ownership and accountability. In case of the cat the onus is upon the senior to ensure safety while carrying the kitten. Whereas in case of the monkey the onus is on the junior to cling on to the senior and stay away from harm’s way. Something tells me, if left alone, baby monkeys have a better chance of staying alive, given that they have been struggling for survival by default. It’s easy to see the Monkey Management style and Cat Management Style in corporate world as well. Simply put, I would categorize most Managers who exercise Centralization, have not empowered people sufficiently, micro manage a lot and don’t involve subordinates in decision making as fans of cat style. The monkey styled managers are those who follow a liberal approach, decentralize, empower subordinates and involve all in decision making.

A decade plus of Industry experience gave me opportunities to work with a varied set of Managers, of different sizes, shapes and mental framework. A good number of them made me apply for multiple jobs, many of them made me realize that anyone can grow in system, some of them brought out a loyal follower in me and a few shaped me to become a leader. Many of these managers were born leaders, completely independent, exhibiting consistent greatness across favorable and unfavorable times. My paths also crossed some great Managers who were supported by a Senior Leader and unfortunately in the absence of the latter, these Managers ceased to showcase the same greatness once associated with them. It may be due to the fact that they had been always under the shadow of the bigger boss and when left to fend for themselves- gaps emerged, that nobody knew existed. Reminds me of Dennis the Menace, such an accurate title.

As theory puts it, there are four basic leadership styles- Autocratic, Bureaucratic, Laissez Faire and Democratic. There is enough material developed and discussed around these styles and its contextual effectiveness. Despite the style and approach one exercises, the Managers generally get categorized in layman language as Tough vs Sweet, People Oriented vs Process Oriented, Appreciative vs Criticizing, Soft Spoken v/s Noisy, Trust worthy vs Crooked,  Friendly v/s Moody, Daring v/s Timid etc. Theory also suggests that the effectiveness of Leadership styles varies based on employee performance exhibited, understanding and adherence of team to standards/procedures, criticality of task performed, creativity needed for work completion, team maturity etc. All said and done, I have not come across many Managers who effectively shift their style of leading based on teams they manage and/or the system they operate in, beyond cosmetic changes based on familiarity and trust. These differentiations at its best could be to the tune of one bordering on Split Personality Disorder. However, for majority of Managers, the basic mental framework and operation mode fueled by beliefs, disbeliefs and experiential learning remains the same thereby impacting people down, across and up.

Flat organizations today, have many managers leading team with representation from Gen X, Y & Z. Due to this and for the overall effectiveness of execution in a demanding environment, it’s important that they follow more than one unique Leadership style. There is no one size fits all approach in Leadership style. Even if combination of various styles has been prevalent theoretically, the demanding corporate set up now necessitates the requirement for a HYBRID Leadership Style. A Hybrid Leader is one who changes approach, style, methods and engagement mode based on people, system, situation and stage of evolution of an organization. They may seemingly act the ‘Cat Way’ with a few subordinates- giving clear instructions on work execution and minutes apart they can be seen with a different set of subordinates, giving suggestions and inviting better ones from them. The effectiveness however, comes in provided this switching happens, which seems to be the problem especially with budding Managers. I have, in the role of a Manager so far given time to people post their joining, to understand their motivation levels, drives, professionalism, commitment levels and work style to arrive at the rules of engagement rather than subjecting everyone to the same treatment. Without ever compromising on the larger goal and outcomes there can be different rules of engagement namely, the Leave Them Alone Mode, Recon Mode and Assault Mode.

Coming back to the monkey v/s cat style, I did take the risk of asking my team once as to what style they thought I followed. Pat came the reply – “Drunken Monkey Style”. Sounds good in Kung Fu, unsure on Organizational effectiveness however. I couldn’t gather the courage to ask him if it was before or after 7:00 PM. The guy isn’t working with me anymore:)