Cost of a bad hire | CielHR.com

Cost of a bad hire 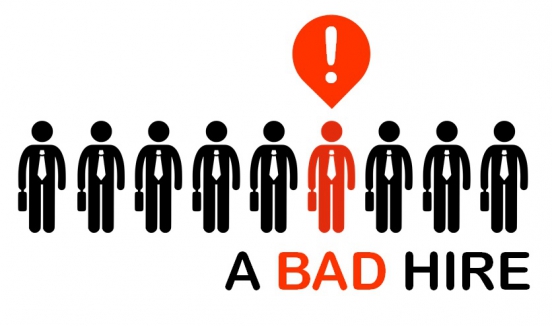 Organizations compete in the marketplace armed with their competitive advantages. Talent is their unique strength that gets built over a long period of time by conscious efforts of the leadership team and their unwavering commitment to a coherent people strategy. Hiring the right people is one of those foundational stones on which the organizational high-rise stands tall. At one level, this is rhetoric unless the operational mechanics in the talent management engine runs seamlessly.

Get your hands around the variables

There are plenty of variables at play, right from the level of the person hired, time taken, direct costs involved, management time spent in actions such as hiring, induction, launching the person on the role, training, coaching and reviewing. There are indirect implications as well – peers and sub-ordinates experience the person, form their own opinions and converse about the impact the person is delivering on the company’s business. The bosses get another task on their plates to quell the water-cooler conversations and negative energy spreading in the company due to the induction of the bad hire.

And at the same time, nobody likes hire and fire policy in action. So, the leadership team cannot show the door to a new hire as soon as the performance results do not match expectations. The organization has to make an attempt to bring the person up to speed and hope for a turn-around. Putting all of these into action and measuring the results take time.

All these variables are around time and resources which need to be enumerated to compute the cost of a bad hire.

Put the numbers against each variable

Sometimes, organizations make the mistake of going by averages. For example, they compute the cost of the hiring team and arrive at a cost per hire by dividing the team cost by the number of hires. They treat the cost per hire (CPH) as the cost of a bad hire; at best, they apply a multiple on the CPH to arrive at the cost of a bad hire. This is a very rudimentary method and does not give the right picture in most cases because of the number of variables at play.

Firstly, we have to consider the time for which the position remained vacant before the person was on-boarded and the time for which it could remain vacant to back-fill in case of the bad-hire is removed from the role. Then, we have to multiply the number of days with daily revenue impact of the role. This could be easy to calculate for a machine operator or a salesperson. But, for managerial roles and business enabling roles, getting a number to signify a day’s revenue potential is not easy. We have to estimate the impact made by the role and put a number for the day’s contribution accordingly.

Secondly, we have to compute the hours spent by various levels of people in the organization to make one hire. Apart from the Talent Acquisition Team, the line managers at multiple levels are involved in screening profiles, interviews, and salary discussions, people in departments like Admin and IT are involved in post-offer stages till the actual onboarding a new hire. Since we have the day’s revenue impact of each role, we can compute the cost of the time deployed in the hiring process.

There could be direct costs such as the fees paid to an agency, advertisements, and licenses for online job boards and so on. These need to be added to the cost of hire. In case, we have a bad hire, all these costs get doubled. Sometimes, we have to staff a role by a temporary resource until a new person is hired to replace the bad hire. The costs associated with getting a temporary replacement are to be added to the overall costs.

Organizational energy gets sucked up when we have a bad hire. The reporting manager, the peers and the subordinate come under a lot of stress in a bid to protect the organization’s reputation, customer service and deliverables. They deploy efforts to align with the new person and his or her approach to the tasks at hand. Most often, a lot of attention and energy of the peers and subordinates gets directed in observing a new person and gossiping about the misfit. Stories get churned out soon about the circumstances in which the person was hired and why such a hiring was done. In large organizations, the rumor mills are not in the close vicinity of the leadership team and hence, they fail to respond in a very agile manner to control the damage to the organization fabric.

In this context, Steve Jobs shared his pearls of wisdom, “The secret of my success is that we have gone to exceptional lengths to hire the best people in the world.”