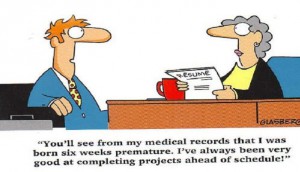 Interviews are important business interactions where a win-win would mean
the candidate wanting to work for the prospective employer as much as the prospective employer wanting the candidate to work for them. Such perfect scenario is a rare occurrence, mainly due to a few gaffes from otherwise good candidates. Let’s look at five such blunders that spoil the interviewer experience and hence, the success.

Incompatible Dressing
The current workforce has representation from Generation X, Y, and Z, thereby increasing complexity. Your attire choice for interview speaks volumes and could attract flak or win brownie points. It will be a disaster to attend an interview in a large MNC clad in casuals, which is fine in a Start-up. Female candidates need to be a bit more careful with their attire selection because formal attire for ladies has a wide range. Best approach is to understand the culture of your prospective employer and to be a Roman when in Rome.

Low Energy/Enthusiasm
Nothing puts off interviewers as much as a weak handshake, bad eye contact, lack of a genuine smile , lack of knowledge about the organization and lack of curiosity. On the flip side, there are few Tarzans out there, who stare interviewers down and crush their palms via handshakes, showcasing excessive energy. The body language during an interview is important and speaks a lot about your interest and energy levels without uttering a word. Use self-help tools, demo videos, observe superior mortals and practice regularly to hone these life skills to attain perfection

Bad Mouthing Previous Employer
Irrespective of who interviews you and however they probe, staying away from cribbing will help. Some candidates in an attempt to impress the prospective employer, get into professional bad mouthing of organization hoping that their interviewer would be impressed by their candor. However, this is an easy way to see the exit door as interviewers normally interpret this behaviour to be an indicator of what the future could be for their employer brand. Be truthful, optimistic and stay away from delving deep into the negative aspects about firms/people

Bed Time Stories
There are candidates who are proficient in ‘talking in circles’. They talk for hours without conveying any iota of information to anyone. Being precise, focused and crisp in communicating helps all. This skill needs to be acquired especially if you are aspiring to grow up the corporate ladder fast. There is another and more important dimension to storytelling. Tall claims of contributions not backed by data and lack of real time examples put the credibility of the candidate at stake. Preparing well for the interview and practicing talks regularly with a focus on the listener and his or her interest is the thumb rule

Gadget Usage during Interviews
Given the penetration of smartphones, Social Media usage is excessive today to the tune of people staying glued to 5.5” screens perennially. Irritating message tones/rings/alerts from candidates’ handheld devices during the interview will distract interviewees and affect answers first and job opportunity second. In an attempt to show-case dedication, few candidates end up texting/calling current employers in the middle of an interview. Such tactics, we need to understand was a thing of the past and is useless today. Phones must be either Silent or Switched off during an interview.