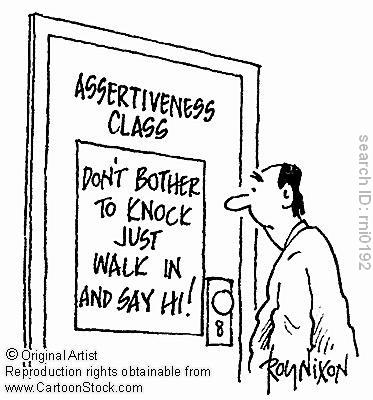 We respect people who speak their mind, especially when they do this tactfully. One is able to influence others when one’s ideas are understood and received well. Great leaders are crafty communicators. They do not hesitate to assert their views even if some of these are not the popular choice. How do they do this? They learn assertiveness and practice the skill over a long period of time.

Given the personality traits that we inherently possess, the values and beliefs with which we grow up and the environment around us, we develop our habits. On one hand, some of us want to stay away from confrontation, argument, and debate; conform to majority views; keep others happy; have a strong desire to agree with the others; bend over backward to be amenable. On the other hand, there are some of us who are aggressive, want their own ways to be followed, throw tantrums if someone doesn’t follow it, do not hesitate to make personal comments on others. This is a wide range of meekness and passivity to aggressiveness and authoritarianism. Neither end of the spectrum is desirable.

We have also seen that the same person behaves passively in some situations while being aggressive in another set of situations. So, speaking one’s mind and being assertive cannot be generalized as low self-esteem. One’s tendency to speak up is dependent upon the context.

Assertiveness is a situation where one is able to fearlessly express one’s ideas in a manner that the listeners receive them actively. There are situations when one is asked to take on a lot more responsibility than what is fair, one is not awarded a promotion that one considers well-deserved, asked to do something that doesn’t seem right and so on. A passive soul carries it out, broods over it, whines about it to others. An aggressive mind protests, walks off, argues, resents and throws tantrums. What does an assertive mind do? It expresses the feelings, states facts, sets expectations, leverages emotions in the communication and builds a vision for the future.

Know who I am!

It is important that I have to be self-aware of what I believe in and why I behave the way I do. This is the first step on my journey towards emerging as an assertive person. If I nurse the ambition to be a great leader, there is no alternative to communicate assertively. I have to learn and master the skill.

One has to discover the obstacles on the way and work towards overcoming them. The obstacles could be the fear of losing affiliations and good will, the habit of tearing someone down, low self-confidence due to lack of knowledge in a subject or social skills, fear of being judged incapable, the habit of being pushy, lack of empathy, wrong conception that disagreeing with someone is tantamount to disrespect and so on.

Most often our audience behaves rationally. They care for me. If I want a change in the external world that cares for me, I must convey how I feel about their behaviours towards me. When they know how I feel, they make adjustments in their approach. Secondly, I must be able to explain how the changes are going to help them and me. In the process, I win and they win.

When I want a new program to be implemented, I drive the program by explaining what changes are desired in the behaviours and how these are going to benefit all of us. If I boss over my team, resistance kicks in. If I fear rocking the boat in spite of knowing that a change is desired, I fail being a leader.

Along the way of implementing the program, I come across challenges. As the leader navigates through the challenges, one’s assertiveness comes to test again. Does the leader slip back into the old habits of being passive or aggressive? Does he or she ignore the lack of involvement of the team, let the plan drift and take the path of least resistance? Some leaders act crazy, publicly admonish the folks not pulling their weight and sermonize them. Neither of the two styles help one emerge as a great leader. One has to learn the right habits and practise them again and again.

Along the way of developing a new behaviour, it is helpful to have an ecosystem around the person supporting his or her growth and development. All human beings need a feedback on how they are doing, especially when they are on a new course. Peers, subordinates, managers, partners, people in the family are in an advantageous position to provide this valuable feedback.