How to deal with power hungry colleagues | CielHR.com

How to deal with Power Hungry Colleagues 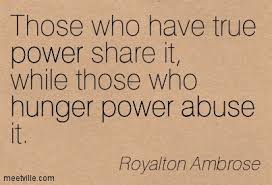 Every workplace has a few such people. They are ambitious to climb the ladder fast, step into the shoes of the others, and take liberties to fire from the shoulders of the boss. They get noticed by the senior managers at work and often are considered to be proactive, self-driven and first among the equals. Peers are often wary of such people and wonder if they could actually complain to the boss about the excesses of this character who is hungry for power. Such people often pass on comments and suggestions in the tone of instructions from the boss. Peers and subordinates change their priorities thinking that the boss passed on his instructions through this person. However, in reality, it might not be so. Hence, this creates confusion at work. How can one deal with such power-hungry people?

Speak to the boss:

The behaviours of such people are either not noticed by the boss or ignored. Often, their energy levels are high; they exude confidence and project various possibilities. They tend to have skills in some areas which are superior to their peers. Bosses appreciate the person taking initiative and being highly engaged. The boss does not notice the attempts of over-reaching the person does day to day.

It is important that the ground level reality is known higher up in the organization. There could be various reasons why the boss is not aware how the access granted to the power-hungry colleague creates confusion and challenges on the floor.  So, one has to find out if the boss has considered this situation and the implications. Barring the occasions where bosses want to create instability in the team, they do care to promote fairness, equity and dignity. So, presented well, they are willing to appreciate the point and make the necessary corrections.

Many times, people let themselves be push-overs than the power-hungry colleague over-stepping the brief. This is only in the mind that we assume the boss is heavily influenced by the person, has started assigning new responsibilities to him and communicating to us through this person. One needs to get out of this presumption and consider the behaviours and words in an open mind.

Even if there were occasions in the past where the words and actions of the colleague in question turned out to be valuable advice, not necessarily all the time it turns out the same way.

We must seek clarifications when this person attempts the over-reach. We should be clear if the boss has actually given the message to you through him. One must be unbiased and evaluate the suggestions of the colleague rather than considering them coming from an overzealous co-worker.

Most people suspect that the power-hungry colleagues will be rewarded with fast careers and bounties without a fair evaluation of performance. The senior managers take an overall view of the performance. In the process, if the business results contributed by the person look good, individual behaviours of over-stepping into the others’ brief get overlooked. Hence, it is good to discuss with the manager about his thoughts on the benchmarks and the evaluation process with regard to behaviours. This process helps the boss get a perspective on the challenges encountered by colleagues at the ground.

If the senior managers do not have their feet grounded, they may lose the sight of the tyranny of the power-mongers and create a whole lot of negative energy at the workplace. The culture goes for a toss. Employees feel disempowered, demotivated and disenchanted. Meritocracy gets scuttled.

Hunger for power is an individual’s characteristic and gets either accentuated or curtailed depending upon the manager’s style and behaviours. It is important to speak to the boss, be unassuming and seek clarity while dealing with the power-mongers at work.