4 owner can stir it up hard | CielHR.com 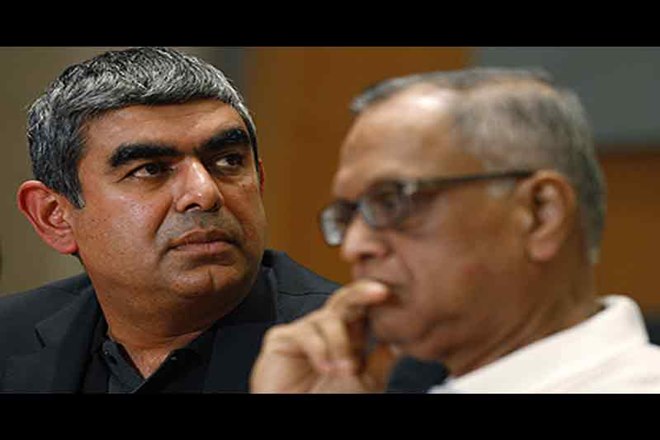 Last week was momentous for many, particularly for professional CEOs and their Boards. Infosys, the iconic IT services company of India was in the news. The differences of opinion between the Board and its charismatic founder were out in the public. The shareholders as a whole became poorer by nearly 3 Billion USD on one day of trading. The company had to announce a buy-back of shares worth 2 Billion USD. One wonders if this whole episode was so unavoidable. Could the CEO have managed the stakeholders better? Could the Board have done better in their public relations as well as following the governance norms? All these questions become interesting especially when the complainant is a mere 4% owner in the company.

It takes two to tango:

A large part of the media and the Board have shown the founder in poor light and objected to his expressing the criticisms publicly. They felt, the founder having retired from the company has to let go and cede control to the successor so that the new leaders can run the company the way they deem fit. Some of them also felt that the actions were taken and norms followed in the yesteryear by the Founder are not valid in the current times. The benchmarks of governance have moved and hence, applying the old methods and norms are nothing but nostalgia. Moreover, the founder being an iconic figure himself when is found criticizing the new team publicly, it hampers the abilities of the new team to perform.

And at the same time, the new team has taken several radical steps which do not seem to make sense to a typical observer and moreover, haven’t shown appreciable results in the near term. Future plans seem to be a distant dream to many. Values of the organization such as sincerity and ethical standards seem to be getting compromised of late. While there is a buzz of new things, they seem to appear hollow to many. However, the CEO and the Board remain deeply convinced of their strategies. These are situations where the team has to be working overtime to instill confidence in the stakeholders and calm their nerves rather than operate from the high altar.

The criticisms abound on both sides: the founder overstepping his remit and the CEO ignoring the basics of stakeholder management. It takes two to tango!

When you are the poster boy, many people look at you, talk about you and follow you. There is bound to be a lot of love and the same amount of hate too!

When the CEO and the Board meet, they must have reviewed the sentiments and opinions expressed in the marketplace towards the company. They know, this messaging would influence functioning of the company. They also know, the criticisms of the founder would be heard in the market and would impact the company even if the founder owned a mere 4% in the company. So, one wonders why the CEO got into an outburst on one fine day eroding a significant part of shareholder wealth and creating a sense of panic not only within the company but also in the industry. One doesn’t expect the boss of a 10 B USD company to react hurriedly to a spate of scathing attacks, especially when he believed them to be untrue and baseless.

Did the task ahead look too daunting and hence, the criticisms were too much of a bother? The lesson for me here is to keep the ears close to the ground and act early to influence opinions.

Take the most along:

One of the most important facets of leadership is to champion the change program and lead it from the front. Along the journey, the leader has to build a momentum and ensure that most people are on board. If he signals too soon for the bogie to move on, most of his co-travelers will be left behind. The bogie will move on and catch great speed, but it would have very few on board. The journey then becomes dull and meaningless. The desired impact of the journey is not achieved.

Organizations in their quest to transform themselves get someone with new perspectives as their leader, however, the leader needs to understand the culture, the values, and beliefs which define the organization. Keeping in mind the future goals, the pace and style of the transformation program have to be designed.

Like one must train well before one runs the first marathon, the leader needs to join the mainstream before he changes the course. Else, the stream keeps flowing its course and at best, the leader is able to create a couple of small distributaries from the stream. Possibly, for Infosys, a large part was not aligned fully and the new leaders were not able to take the most along with them! Hence, the lesson for me is to take everyone along!